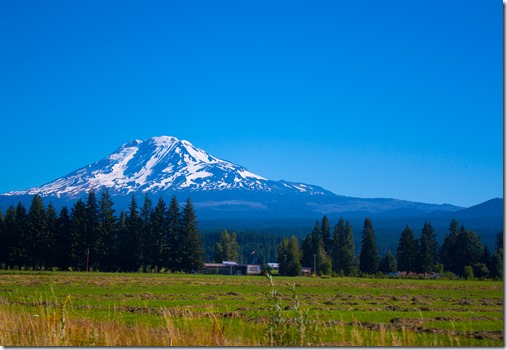 If you are a newbie and want to climb Mt. Adams, this could be the post for you. Adams provides for a very very strenuous but non-technical climb to a really huge peak. The sense of accomplishment is great the risk is low(ish).

19th and 20th July, 2013 we climbed Mt. Adams. At 12,281 ft (3,743m) this is the second tallest mountain in the state of Washington after Mt. Rainier (14,411 feet). I am a complete newbie to hiking and could’ve never imagined an year ago that I can accomplished this. In this blog I will try to chalk out what went right and wrong and how a newbie hiker can accomplish this. If you are an expert hiker, you should always ignore blogs like these, put on your 5 finger Vibram and run up Adams in a day.

Obviously this will vary based on one’s personal fitness level and also how much time you are prepared to spend on this. I have been hiking for 2 years. This being the second year. Last year the biggest hike I did was Mt. St. Helens in the summer and even this year I again did Helens in the winter (post to follow).

After talking to various hikers and climbers I figured out that the obvious challenge is to hike up to base camps with large backpack, sleep just couple of hours and then do an equally strenuous hike the next day. I am not that big into exercise, I run a bit, do weights a bit and in general hike a lot but slowly with my family and my eight year old daughter. All in all not in really bad shape but not a typical PNW (Pacific North West) hiker :).

Other than starting to run couple of times a week (around 3.5 miles on the road) I started doing back and core exercises to strengthen my upper body. I hiked almost every weekend or after work. These hikes were mostly hikes like Mt. Si, Granite or Bandera which hovered around 8 miles (roundtrip) with around 3500ft gains. I generally had a backpack with 25lb in it.

Closer to hike day I did couple of hikes up Mt. Si with 50lb backpack. I filled the pack with water. The great thing about doing that is, you can throw the water on the top of the peak and save your knees from the brutal hike down. 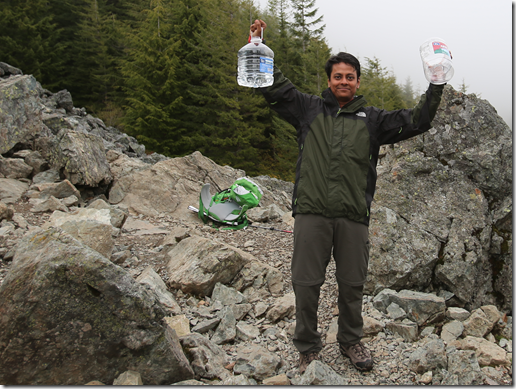 Knowing how to do this is a must for Adams. I had to self arrest twice on this trip. First while glissading down when I spun out of the glissade chute. Second on the crescent glacier while we got stuck on a steep section and had to slide down the slope.

This is what I carried for this trip. I had accumulated most stuff over the past year or two and rented the rest from REI. I built my list by consulting various web-sites. One good one was https://www.alpineascents.com/pdf/adams-climb-gear.pdf. 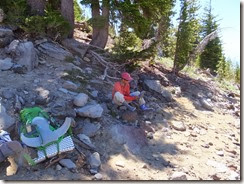 The biggest blunder I did in the selection is that I got the cheapo rented plastic boots from REI. Worse still I decided to hike up to base camp wearing that (instead of using hiking boots and packing the snow-boots in). I had blisters two miles into the hike and I think the choice of wearing 4 lb each boots almost ruined our climb. The photo is of me taking care of blisters. I just put in a band-aid and covered it with gorilla tape (yep) and it remained in place. I also taped around the hot-spots in the feet to prevent further blistering.

Save yourself all of the trouble and buy good mountaineering boots. 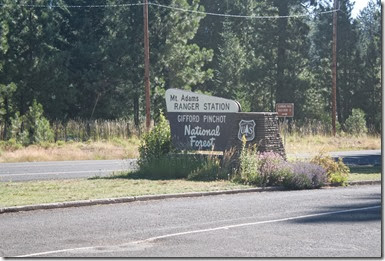 We went to the restrooms the final time and put on our plastic boots (ouch!) and started our climb at 11:10. The initial part is through forest completely burnt with a forest fire last year.

Around 12:20 at 6600ft 2.4 miles into the hike we hit snow. We decided we didn’t really need any crampons because the snow was really mushy. 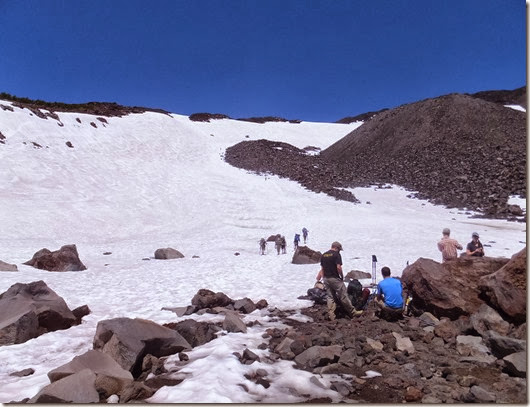 We hung around for some time had our first energy bars and started the climb again. 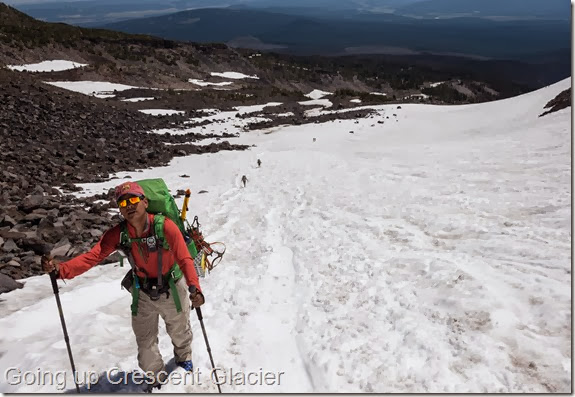 The sun was beating down and up (snow reflected) on us. The soft snow was really really hard to climb through. We were in the middle of the crescent glacier. On the way we met quiet a few climbers. One was from Pharmaceuticals background and shared with me how Indians have a mutation which makes our hearts weak (I have heard of this before). It was not encouraging especially we were in a very steep slope and continually slipping. We had a big incident here on the way down, but more about that later.

Around 2:30 at 7700 ft we hit a really rough spot. It was super steep and the snow was so soft, I kind of thought we would not be able to make our way up. From there till 8200ft was nightmarish. When I finally reached the top of that lip it was a huge but short lived relief. 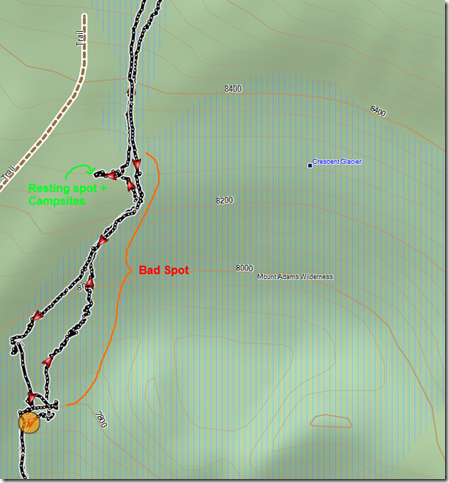 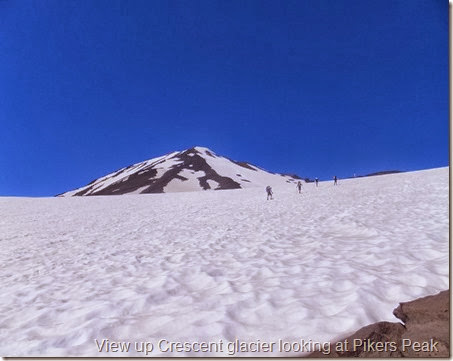 Finally the tough spot was over at 3:23 at 8261ft. There were some camping spots at this place as well, but they were all vacant. We bade our friend Gaurav temporary farewell as he pushed forward to reserve camping spots for us. Yaniv and I were wimps and rested here for some time, took a bunch of photographs and finally after 30 mins continued up the Crescent glacier.

6.5 hours, 5.2 miles, 3800 feet gain later we setup our camp at an elevation of 9300 ft at around 5:40 p.m. Gaurav had chosen a spot on “Lunch Counter” on a dry spot as close to the face of the mountain as possible and just beside the glacier so that we had snow to melt for water easily.

Yaniv actually went to sleep. We have photographic proof.

We got down to the business of setting up camp. We were told that there is a stream of water, but it was too thin and we weren’t able to use it well. So I also melted some water and made some nice chai. We had two tents setup for 3 people. I got the royal treatment and got a tent to all by myself. 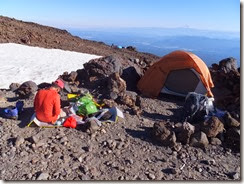 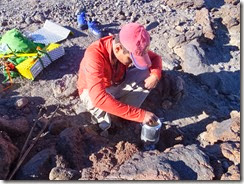 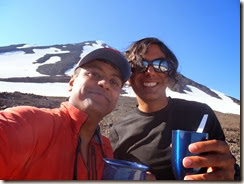 Our plan was to make dinner, eat and sleep early. However, the sun decided to set. It was so gorgeous we forgot everything and just got busy taking photographs. 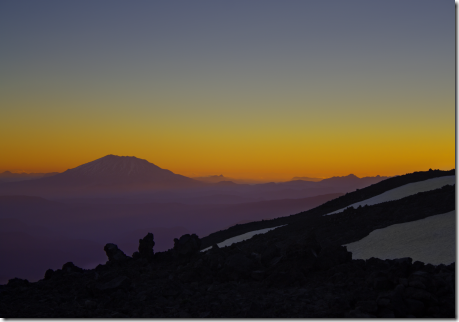 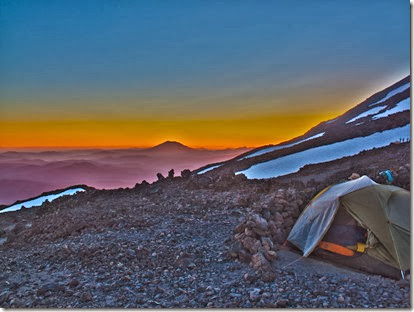 In no time it was time to get up. We got up at 2:30 a.m.. Made some quick breakfast by boiling water and putting it in the mountain house meal packets. Got dressed and setup for climbing by 3:40 a.m. I was fatigued before even I started my summit day. The combination of sleeping just 3 hours the night before (due to early start from Seattle), 6 hours of climbing and a repeat night of 3 hours of sleeping was too much for me. In my mind I already gave up. The daunting view of the climb to Piker’s peak didn’t help.

However, not willing to let fellow climbers down, I put on the head-lamps, crampons and started out.

We were going up very steep slopes and Yaniv was already not feeling that well. He took some breaks to slow down. The sun was rising and it lit Mt. Hood in golden colors. 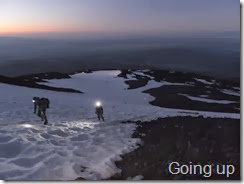 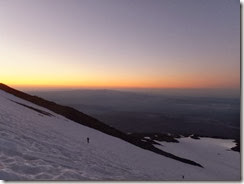 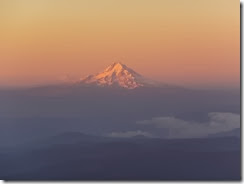 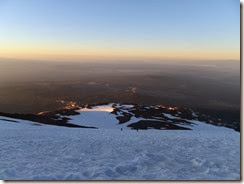 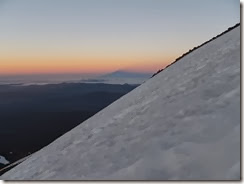 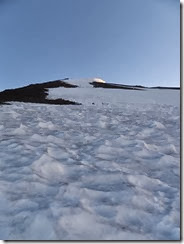 Yaniv was not feeling well and altitude sickness caught up to him. He was having trouble breathing. Sadly we bade him farewell and decided to keep contact over radio.

Finally around 7 a.m. we reached Pikers peak at 11,500. The look down was very encouraging, I was mind blown that we got up so high. . 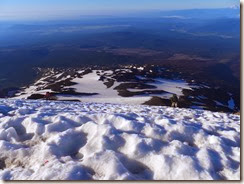 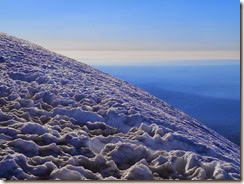 However, then I turned around and looked at the real peak. It was super far off. I will remember that point for my whole life. I was completely beat, I had thought we almost made it and there was only a little further to go. But now I realized the last 800 feet was almost impossible for me. I was ready to give up. 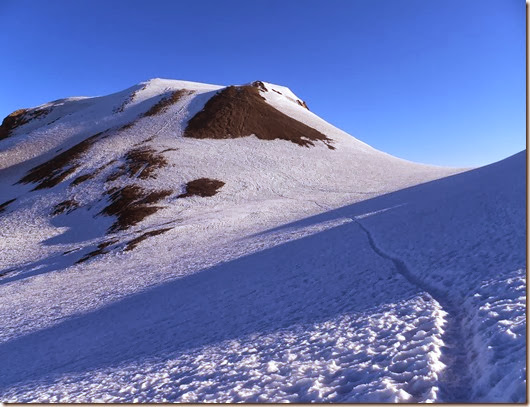 At this point, Gaurav said, lets not plan to go to the summit. Lets just go to the bottom of the real  peak and then re-consider. We went on thinking this way for the next three phases. It always looked daunting when we looked up, and so I choose to just stare at my feet and take each step at a time… 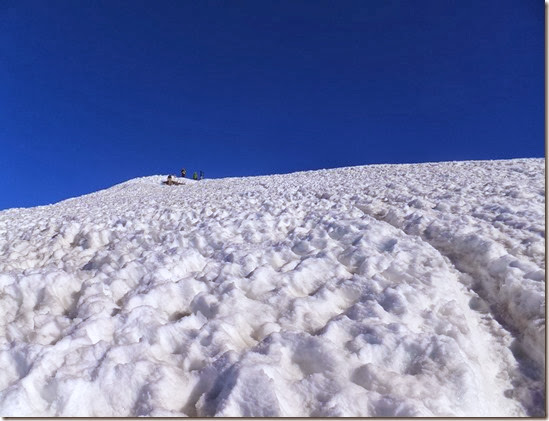 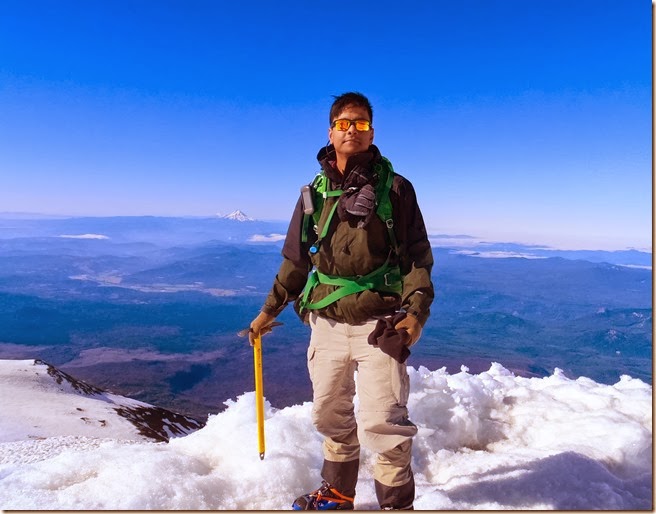 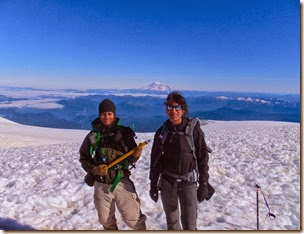 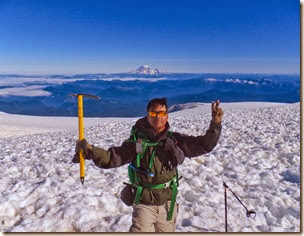 We dropped our bags and strolled around the summit. We could see St. Helens, Rainier and Hood far off.

We turned back and started the slow march down. I had lot of fun glissading down, but it was very scary at places. It was hard to see what was ahead and I spun out of the glissade chute multiple times and had to self arrest with the ice-axe. Finally we broke the camp and started moving down from there. 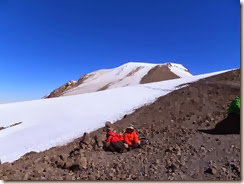 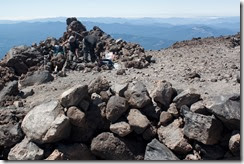 I have always heard that a lot of accidents happen on the descent. We got a taste of it first hand. By the time we reached the steep descent in Crescent Glacier the snow was very soft in the strong sun. We could see rocks jutting out of the snow and since we couldn’t see what was beyond certain points we decided to hike down and not glissade. Soon we were at a steep section which was too soft to stand and we were slipping. Our Ice-axe was still attached to the backpack. Gaurav feel first and hit a huge rock spraying debris. His backpack and poles came off and slid down. Thankfully he was not hurt. We tried to walk a bit further and realized we just cannot make it and once we were clear of the rocks we slid down. When we were at the bottom we realized we should’ve just glissaded down in the first place. A ranger coming up had seen us fall and he stopped by to see if we were safe. 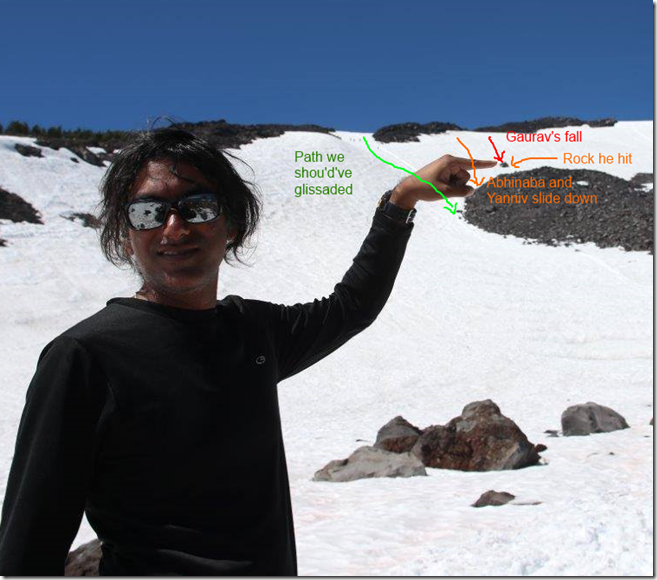 After a long long hike we finally reached the trail head and drove back to Seattle. The most dangerous part of our trip was the drive back. The driver actually fell asleep. Looking back we should’ve just slept at the lunch counter and enjoyed the mountains and not tried to drive back.

The partial climb profile is here… 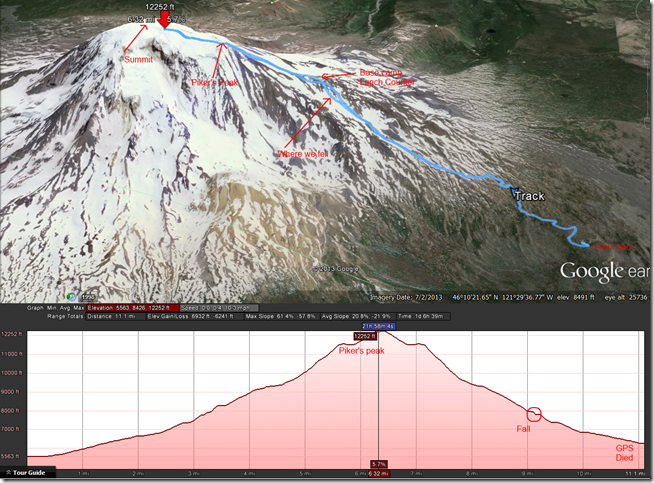