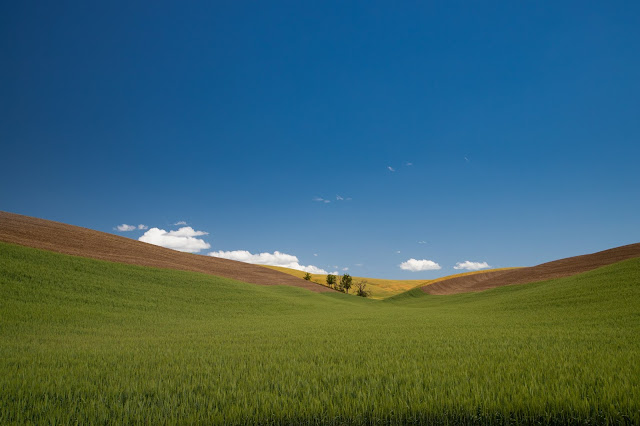 Building an enterprise grade distributed service is like trying to fix and improve a car while driving it at high speed down the free-way. Engineering debt accumulates fast and engineers in the team yearn for the time to get to them. A common complaint is also that we need more time to tinker with cool features and tech to learn and experiment.

An approach many companies take is the big hackathon events. Even though they have their place, I think those are mostly for PR and getting eye candy. Which exec doesn’t want to show the world their company creates AI powered blockchain running on quantum computer in just a 3 day hackathon. 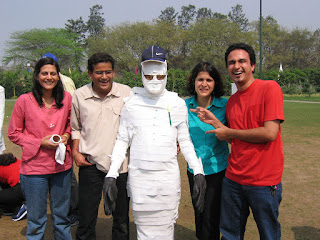 This is where CAYL comes in. CAYL or “Code As You Like” is named loosely on “go as you like” event I experienced as a school kid in India. In a lot of uniform based schools in Kolkata, it is common to have a go as you like day, where kids dress up however they want. The nearest western example is Halloween, but go as you like is not ghost themed, it does not have any theme. The sidebar pic is me dressed as a mummy as I was going to be a new daddy (this is from when I was in Adobe)

Even though we call it code as you like, it has evolved beyond coding. One of our extended Program Management team has also picked this up and call it the WAYL (Work as you like day). This is what we have set aside in our group calendar for this event.

“code as you like day” is a reserve date every month (first Monday of the month) where we get to code/document or learn something on our own.
There will be no scheduled work items and no SCRUM
We simply do stuff we want to do. Examples include but not limited to
We can stay late and get things done (you totally do not have to do that) and there will be pizza or ice-cream.
One requirement is that you *have* to present the next day, whatever you did.  5 minutes each

I would say we have had great success with it. We have had CAYL projects all over the spectrum
We just finished our CAYL yesterday and one of my CAYL items was to write a blog about it. So it’s fitting that I am hitting publish on this blog, as I sit in the CAYL presentation while eating Kale chips
Posted by Abhinaba Basu at Wednesday, October 09, 2019 No comments:

I remember a discussion with a group of friends around 8 years back. Microsoft was in it’s early days of becoming a leader in the cloud. Those friends, all techies in the Seattle area had varying expectation on how it would work out. Many thought that a full blown move was few decades away because their experience indicated that all big companies ran on stack that was very old and simply couldn’t be moved to the cloud any time soon.

Waves of workloads have been since moving to the cloud. A new brew of startups were cloud native from the start and they were the first to use the power of cloud. Many large and small enterprises had already virtualized workloads and they moved as well. Some moved their new workloads (green-field), some even followed lift-n-shift with some modifications (brown-field) into the cloud.

However, a class of large enterprises were stuck in their data centers. They wanted to use the power of the cloud, they wanted to use IoT integration, Machine-learning and the capability of elastic growth of their applications, but the center of their systems were running on some stack that did not run in the standard virtualization offered in the cloud. These enterprises said that if they cannot move those workloads into the cloud, they would need to keep the lights on in their data-centers and moving some peripheral workloads simply did not make sense.

This is where Azure Dedicated and we come into the picture. 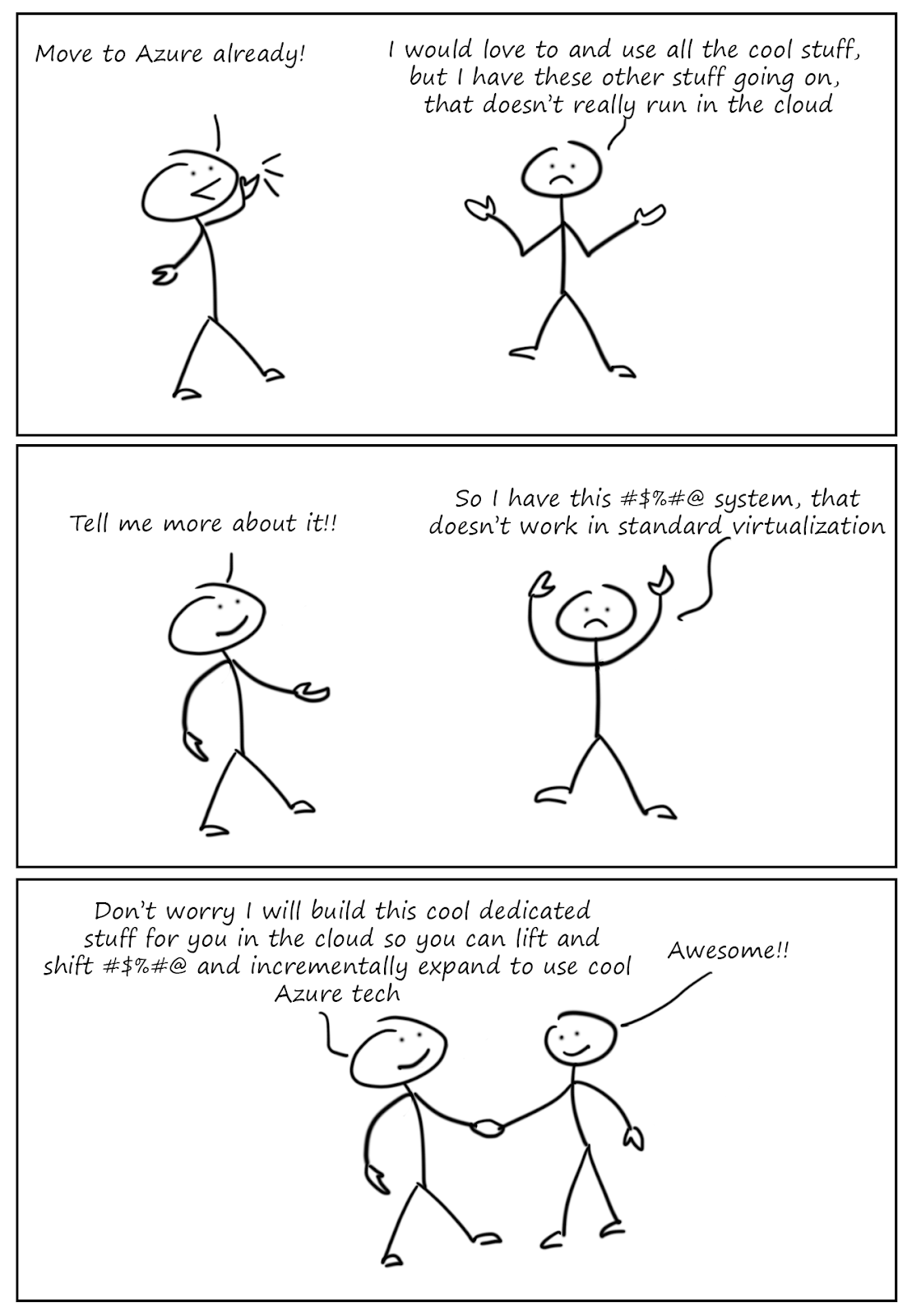 For some of these customers that #$%#@ is SAP HANA in-memory DB on a single machine with 768 vCPUs and 24 terabytes of ram (yup) and we have them covered. Some wanted to scale those out to 60 terabytes in memory, we have them covered too with our bare-metal machines running in Azure. See SAP HANA Large Instances on Azure. They wanted to then expand their applications elastically using VMs running on Azure with sub 1 ms latency to those baremetal DB machines, we have that working too.

We started our journey in this area with this workload. Now we have evolved into our own little organization in Azure called Azure Dedicated and also support the following workloads.

Some customers wanted to run their VMware workloads and we have two offers for them, see more about Azure VMware Solution by CloudSimple and Virtustream here

In partnership with other teams in Azure we support HSM, which are standard cryptographic appliances powering say financial institutions.

So you need to simulate something or do ML on tens of thousands of cores, we have Cray super computers running inside Azure for that!!

In partnership with SkyTap we provide IBM Power workloads on Azure to customers.

We know there are more such anchors holding back enterprises from moving into the cloud. If you have some ideas on what we should take on next, please let me know in the comments!
Posted by Abhinaba Basu at Monday, September 30, 2019 No comments:

Abhinaba Basu
Engineering Manager for Azure Bare Metal cloud focussing on very large memory workloads. In the past I have worked in Bing query serving pipeline and in the core execution engine of the Common Language Runtime (.NET) on various areas like Loader/Binder, Garbage Collection, Platform Abstraction.