In the comments of my previous post Windows Phone 7 Series Programming Model and elsewhere (e.g. twitter, WP7 forum) there seems to be a lot of confusion around how NETCF 3.5 compares against the new WP7 programming model powered by NETCF 3.7. People are asking why some API got removed from 3.5, or is 3.7 a subset of NETCF 3.5 as they are not seeing some familiar 3.5 APIs.

First I’d urge you to go visit the Windows Phone 7 Series Programming Model to see what it offers.

Essentially NETCF 3.5 can be broken down to

Now each of this has been updated (in order) as follows

So the runtime is hugely updated (and hopefully you’d feel the improvements, especially in performance).

For #2 and #3 the level of difference is same in magnitude as you compare WinForm with Silverlight on desktop. They are simply two different programming models.

In case you hit a 3.5 API  that’s missing then it’s either because it’s (a) WinForm based API that got totally replaced, or (b) a BCL API that the Silverlight profile doesn’t support. The workaround is to search for how to do the same thing in Silverlight (e.g. use XDocument instead of XmlDocument). In some cases you’d get into situations where there is no direct alternative. E.g. there is no P/Invoke and if your code say P/Invoked to get data from a bar-code scanner you cannot do so now.

Also keep in mind that the bits available right now is just early preview bits and subject to a lot of change. The whole purpose of having CTPs is to hear our customers and ensure we use the remaining time before release in fixing issues that helps our customers the most. Hopefully some of the gaps will get closed before the final release.

Currently the supported platform is S60 5th Edition phones and in particular the 5800 XpressMusic, N97 and N97 mini. It works in-browser and only in the Nokia default web-kit based browser.

Silverlight on S60 uses .NET Compact Framework (NETCF) underneath it. I work in the dev team for the Execution Engine of NETCF and I was involved at the very beginning with getting NETCF to work on the S60 platform.

NETCF is extremely portable (more about that in later posts) and hence we didn’t have a lot of trouble getting it onto S60. We abstract away the platform by coding against a generic platform abstraction layer (PAL), but even then we had some challenges. Getting .NET platform on a non-Windows OS is challenging because so much of our code relies on Windows like functionality (semantics) which might not be available directly on other platforms.

As you can see the first code to run was a console application and it was not Hello World :). We have come a long way since then as evident from the touch based casual game running on the N97 shown below 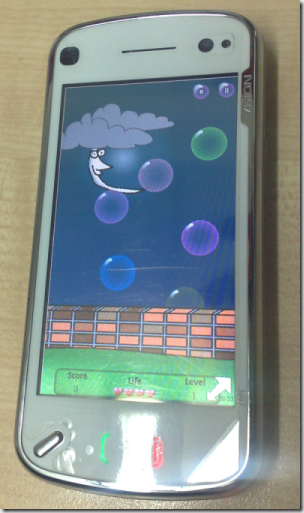 Just sometime back I posted on the MIX 2010 announcements. One of the major aspects of the announcement was

“The application model supported on Windows Phone 7 series will be managed only and will leverage Silverlight, XNA and the .NET Framework”

That’s a mouthful and includes 3 framework names in once sentence :). This was already disclosed and has resulted in some flutter over the web and twitter. Let me try to explain how these 3 interplays in the application model with the following diagram

First of all the application model allows users to write only managed code (to repeat native code is not allowed). That means they do not have direct access to any native APIs and cannot use platform-invoke to call into native user or system code. So all resources including phone capabilities have to be accessed using the various managed APIs provided.

There are 2 variants or flavors of applications users can write, XNA Games and Silverlight applications. Obviously the former is for writing games and the later is for your typical phone applications (nothing stops you from writing a Silverlight animation based game though). So you cannot mix-match SL and XNA UI in the same application.

However, do note that the traditional NETCF development using WinForm based UI is not supported.

Common Services available to both

That said, beyond the UI rendering and controls there is the common services which both SL and XNA applications can use. This includes all the phone capabilities like microphone, location, accelerometer, sound, media, networking, etc... Some of these features come from SL and others from XNA but land up in the common pool usable by either types of applications.

The core runtime for both SL and XNA applications is .NET Compact Framework (henceforth called NETCF). This is the team I work for.  .NETCF is a highly portable and compact (as in smaller size and footprint) implementation of the .NET specification. It is designed to run on resource constrained devices and on disparate HW and SW configurations.I will have a post later on the detailed architecture or .NETCF.

Over the last two years a lot of work has gone into .NETCF to scale it in terms of features, performance and stress to meet the requirements of Windows Phone and other newer platforms on which it is being targeted. We also added a lot of features which I hope you will enjoy. Some of the features is just to reach parity with the desktop CLR and others are device specific and not available on the desktop.

Over this blog in the course of the coming months I’ll try to share with you what all we did to reach here.

Today is a very big day for me and my team. The stuff we have been working on is finally went live on stage MIX 2010.

Windows Phone 7 is easily the most dramatic re-entry/reset Microsoft has undertaken in any field it’s in. We announced the phone in MWC and the reception it got was phenomenal. However, in the new connected devices world, the application platform+market story is as or more important than the device itself. Today at MIX we just disclosed details of that.

Our team was involved with building the IDE, the emulator and the core .NET runtime that powers the applications. So watch out and in the coming posts I’ll deep dive into these areas.