Just went for a short day trip to Bidar from Hyderabad on Jan 16, 2010. This post is to document the whole plan and quick tips  Since we travelled with GPS and Google maps have excellent coverage of the area we didn’t face any issues.

The way to Bidar

The route maps on Google here. The total distance came out to be

around 115kms from Miyapur. The route is pretty straight forward. Get onto NH9 which goes from Hyderabad to Pune and onward to Mumbai. Drive around 85km and then take a right onto SH4 and drive around 26 km to reach Bidar (which is in Karnataka). The right turn is well marked out and clearly points that it goes to Bidar.

We started around 7:00 a.m from Hyderabad and even though we expected around 2 hours of driving it turned out to be 3 hours as we took a pit-stop in the Haritha Restaurant (APTDC) for breakfast. The restaurant came around 60-65 kms from Hyderabad. The choice of food was limited but the Poori and Idli we had was steaming hot and sumptuous. The bathrooms were clean as well :). The stop is highly recommended.

The road was excellent all the way and traffic was sparse, I could drive easily at 100kmph. Just before reaching Bidar there is a reserve forest and when we were driving through a tiger leapt in front of our car. Ok I was kidding the forest is there and my daughter was trying to see a tiger :)

We took the following route plan inside Bidar 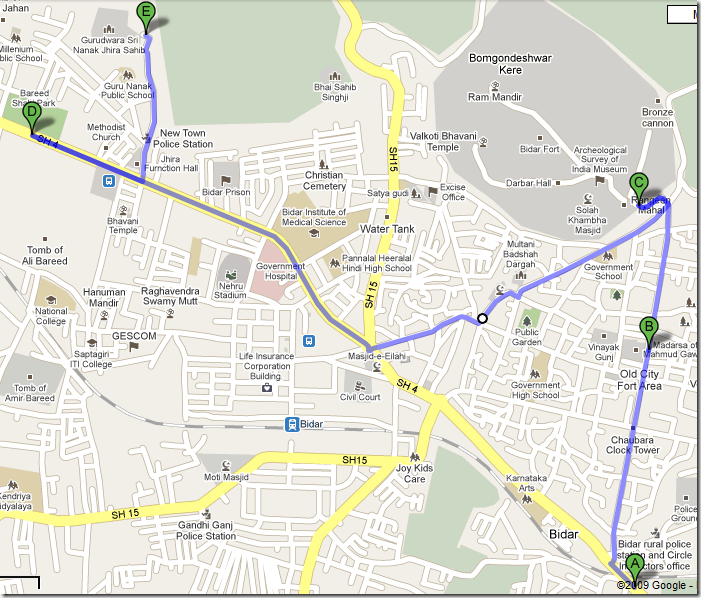 Just after entering Bidar (A) you’d see an old Fort gate on the right, get into it and you’ve reached the old city. After that you just need continue on the straight road. The un-mistakable clock tower (chaubara) would be infront out you.

Our first stop was the remains of the ancient theological college (B), Mohamad Gawan Madrasa. Built in 1472 by Gawan, a Persian exile and scholar of the Bahmani court, this was one of the greatest centers of Islamic learning of its time, attracting students from all over. We got some nice shots of the place and the beautiful green parrots hovering around added to the color.

From this we drove another km to the Bidar fort (C), which comes straight ahead. After getting through another set of fort gates we got into the fort.

Do note that the whole idea of fort gates is to make entry difficult and not allow you to see what is ahead, so drive carefully and honk (there is a sign that proclaims horn-mandatory).

Inside the fort we first went to the museum and then asked the folks their to show us around the fort. The fort is kept under lock-key to prevent people from scribbling pappu-loves-pinki on the walls and you need to explicitly ask to be shown around (and tip them at the end). We were shown around the various Mahals, especially the Rangeen Mahal took our breadth away. The museum also has some interesting pieces like locks which are bigger than my door and huge guns which could be carried only by people who anyway didn’t need them.

Just outside the museum is the canteen where we grabbed some food and coffee. The whole area around Bidar cultivates sugarcane, and if you are not explicit about it they’d put all of that in your cup of coffee. Energized with all that sucrose we ventured out to the back of the museum to see the diwan-e-aam and diwan-e-khaas.

After that we drove down to the Barid Shahi tombs (D). It has a nice little park and our daughter enjoyed the welcome break from seeing old buildings and enjoyed the slides and slings.

Our last stop was the Gurudwara Nanak Jhira Saheb (E). Finding the was easy as there is a gate on the SH4 from where you need to get into the road that leads to the Gurudwara. Do remember to carry shawls for women and handkerchief for men to cover the hair which is mandatory to enter the Gurudwara. In case you forget you can always get them at the Gurudwara but putting cloth which hundreds have used before might be a bit yucky :).

We paid Rs10 to get some very tasty halwa which was loaded with Ghee. The Gurudwara had clean pay-n-use loo which helped :)

We asked the Sardarji security guard for some pointers for good food and we pointed to a fantastic restaurant. It’s called Rohit Restaurant and is on the road that leads to the Gurudwara from SH4 and is just beside the police chowki. It’s Punjabi cuisine, vegetarian and is clean and the food proved to be excellent (their naan/daal-fry can hands down beat any 5-star restaurant). Highly recommended.

On the way back we again went back to the Clock tower (choubara) area to pick up some Bidriware which is specialty of this City. These are hand made by putting in silver threads into copper, zinc allow casts. It’s pleasure to actually see them being made and buy from the artisans directly. Do not buy Bidri from the main road as they’d loot you. Ask for choubara and then when you reach that area ask around for the shops.

It was around 3:30 when we finished our Bidar tour and drove back to Hyd.

If you visit Bidar and want to get something added/updated to this post do leave a comment.

Email ThisBlogThis!Share to TwitterShare to FacebookShare to Pinterest
Labels: Amazing India, Everything Else, travel

Thanks for useful information.
You really helped a lot

I did this trip based on things suggested here. Wonderful one. Thanks a lot.

Hey...Your post helped me a lot. I went to Bidar yesterday.....Thanks a ton!

A well chronicled walk-through indeed. We shall post our experiences once we visit. thank you.
Sastry

Great post and it helped greatly with the trip.

In the fort, the Rangeen mahal and the Solah Khamba Masjid were locked but as suggested we requested the ASI staff and they showed us both the places.

Minor feedback on the post. Do mention the starting point for distances mentioned from Hyd to Bidar. We found them off by about 5Kms.

Also, we made it an overnight trip. Decent rooms (with/without A/C) are available at the Gurudwara Nanak Jhira Saheb from Rs 150/- to Rs 300/-.

Thanks for the detailed crisp blog details. We had a family trip yesterday from Hyderabad and this information was really useful. --Sudhakar
www.sudhakar.com

Thanks very much for this. Just done the trip with my son. One update - there was nobody on duty at the Fort to give guided tours, and renovation work is ongoing, so you can't venture inside. But certainly a worthwhile day trip from Hyderabad

Very good information. It helped us. used details in this blog for our trip... It was great.. Thanks a lot for sharing....

Trips like this are memorable. And it would be a real comfort when you don't have to wait at ticket counter. Now a days bus tickets are booked online.

I am planning to visit Bidar next month. After reading your article, I am compelled to do so even more. If I want to avoid and driving and go by bus, will I reach within 3 hrs! Anyway. Thanks for a very nice post.

Thanks for sharing. This post was helpful for my trip to Bidar today (23-Jun-2013).
The road from Hyderabad is Ok except for two patches of around 10 and 15 kms.
I would suggest people to have lungar at Gurudwara and also do some sewa there. You will love it.

very useful post, looks like u covered a whole lot in a day! one upcoming attraction in that area is the black buck resort.

Hi,
I am Mohammed Amer from Bidar. I have been living in Bidar from 8 years. It is such a wonderful and beautiful place! I am blogger and my blog is www.amerinator.blogspot.com. It is about technology and computers.

Nicely written. I am planning to visit there during christmas from Bangalore.This information helpmed me a lot to plan my trip.
Refer my blog for details too.