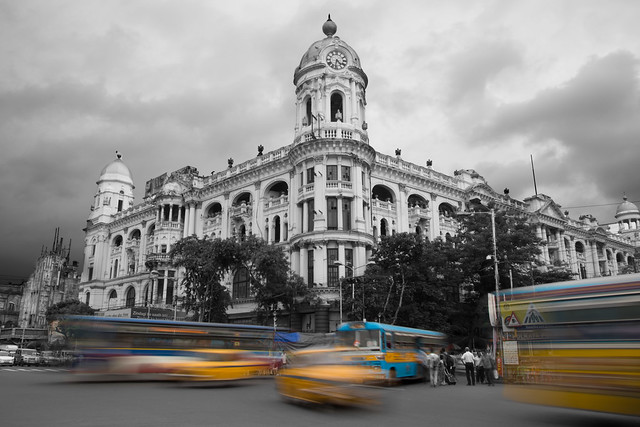 If you are trying to add Wifi connectivity to an existing Arduino project or have serious aspirations for developing a Internet of Things (IoT) solution, Arduino + ESP8266 wifi module is one  of the top choices. Especially the Nano because it is super cheap (<$3) and is very small in size. Using some sort of web-server directly on ESP8266 (e.g. via Lua) doesn't cut it due to the lack of IO pins on ESP8266. You can get a full IoT node out at under $12 with a few sensors, Arduino Nano and a ESP9266 module (excluding the power supply).

Inspite of a plethora of posts online it turned out to be very hard for me to get this to combination to work. I spent atleast 3-4 days until I actually got this right. The main problem I see is that a lot of the solutions online are actually down-right incorrect, not-recommended or for other similar boards (e.g. Arduino Mega). Also there are a few gotchas that were not commonly called out. Before I start let me get all of those out of the way 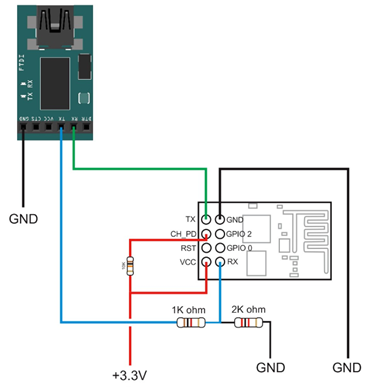 As mentioned above I first set the ESP8266 BAUD rate to 9600. If yours is already 9600 then nothing to be done, if not you need to make the following connection

Then using specific AT commands from the PC set the 9600 BAUD rate on the ESP8266. I used the following circuit. Where the connections are as follows

In the serial monitor ensure you have the following set correctly. The BAUD should match the preset BAUD of your ESP8266. If you are not sure, use 115200 and type the command AT. If should return OK, if not try changing the BAUD, until you get that.

Then change the BAUD rate by using the following command, and you should get OK back

After that immediately change the BAUD rate in the serial monitor to be 9600 baud as well and issue a AT command. You should see OK. You are all set for the ESP8266.

This step should work for Uno as well. Essentially make the same circuit as above, but now instead of FTDI use an Arduino. I used pins 8 and 9 on Arduino for the RX and TX respectively. 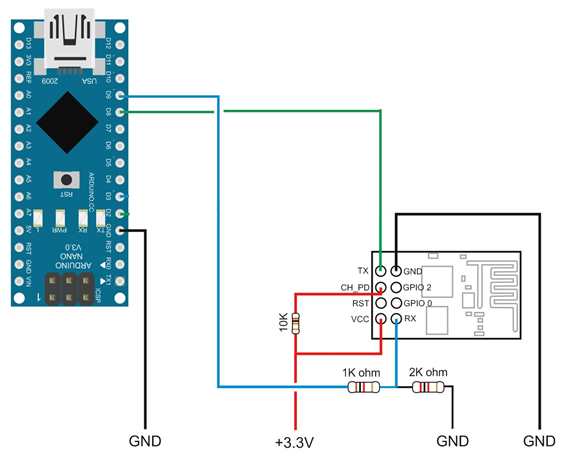 Even though I could easily run AT commands with the PC <->FTDI <-> ESP8266, I ran into various issues while doing the same programmatically in PC <->Arduino <-> ESP8266 setup. So I wrote the following very simple code to pass on commands I typed in the PC via the Arduino to the ESP8266 and reverse for outputs.

The code is at GitHub as https://github.com/bonggeek/Samples/blob/master/Arduino/SerialRepeater.ino

With this code built and uploaded to Arduino I launched the Serial monitor on my PC. After that I could type commands in my Serial Monitor and have the Arduino pass that only ESP8266 and read back the response. I can still see some junk chars coming back (in RED). All commands are in Green and could easily enumerate all Wifi in range using AT+CWLAP and even connect to my Wifi. 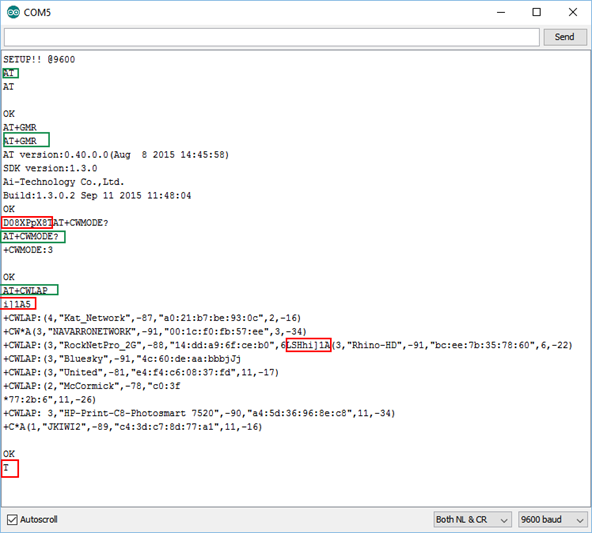