I am just back from a road-trip that spanned 3200 miles (5000kms) from Seattle to San Diego and back. We travelled with a 8 year old, which meant more fun and excitement, for everybody ;)

My digital gear on this trip was as follows 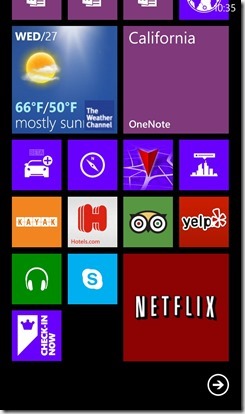 I kept all of these stuff (other than the camera) in a single bag and carefully hauled them around. I ensured that they were never left unattended in the car.

My Windows Phone 8 (Nokia Lumia 920) rocked this trip. I am sure other phones would’ve worked as well, but the live tiles of Windows Phone really shined through. I installed a bunch of apps and pinned them all together.

One-Note: I literally run my life on One-Note these days. From planning trips, hikes, to debugging notes, I keep everything in One-note. Using One-Note I could plan my trip on the Surface from the hotel bed. The One-note doc would auto-sync with our phones ensuring that the information was on our finger-tips the next day when we were on the road. The large pinned California One-Note tile contained all our trip plans.

Weather App: I used The Weather Channel app. In the screen shot you can see the live tile for my next destination pinned to the home screen. WP8 allowed multiple of those to be pinned and I could always see what was coming up (sunny and mild day in SFO) in all the cities I was planning to be in. I could and did switch around order of cities I was travelling to based on weather forecast.

Nokia Drive + Maps + City Lens: In addition to the car GPS we used Nokia suite of tools including the Drive, Maps and City Lens to get our bearing while walking around in the city. Few times we used the phone for in car navigation as well. The maps didn’t let us down.

gMaps: Unfortunately the gMaps Google map app didn’t work out that well for me. Google maps has much better data in some contexts (e.g. trails and street view) but the app was unstable and also it always needed connectivity and reduced network coverage on the road was seriously hampering the usage. I think it is sad that Google doesn’t make their own apps for the Windows Phone.

Music: We used Nokia Music as it has better Bollywood coverage. We also got a ton of our Bengali music collection onto the phone. By the end of the trip, Prokriti (my daughter) was humming tunes from our college day music.

Hotels.com: I did most of my booking on hotels.com. Especially because it gives 1 day free stay on making 10 reservations. The limited screen on the device did pose some issues in making the right hotel choices but I even made a reservation while standing in a queue in Seaworld.

Yelp: For deciding where to eat.

4th & Mayor for making foursquare checkins so that I can later recollect where I’d been.

Netflix: To keep my daughter busy when the trip really seemed long. I do have unlimited AT&T 4G on our phones but high-speed connectivity is hard to come by on the road. So she mostly watched stuff on her Surface.

Photoshop Lightroom: On most nights after settling down in the hotel, I would transfer photos from my camera and do a quick pass with Lightroom. I’d make reject and keep calls on them. Then backup the photos on a thumb-drive and also copy over to one of the Surface RT. So I essentially had 3 copies backed up at all times.

Email ThisBlogThis!Share to TwitterShare to FacebookShare to Pinterest
Labels: Everything Else, Fun, travel