Windows Phone Mango: Under the hood of Fast Application Switch

Fast Application Switch of FAS is kind of tricky for application developers to handle. There are a ton of documentation around how the developers need to handle the various FAS related events. I really liked the video http://channel9.msdn.com/Events/DevDays/DevDays-2011-Netherlands/Devdays059 which walks through the entire FAS experience (jump to around 8:30).

In this post I want to talk about how the CLR (Common Language Runtime or .NET runtime) handles FAS and what that means to your application. Especially the Active –> Dormant –> Active flow. Most of the documentation/presentation quickly skips over this with the vague “The application is made dormant”. This is equivalent to the “witches use brooms to fly”. What is the navigation mechanism or how the broom is propelled are the more important questions which no one seems to answer (given the time of year, I just couldn’t resist :P) . Do note that most developers can just follow the coding guidelines for FAS and never need to care about this. However, a few developers, especially the ones developing multi-threaded apps and using threading primitives may need to care about this. And hence this post

The entire Multi-threading design was made to ensure the following

Principle 1: Pre-existing WP7 apps shouldn’t break on Mango.
Principle 2: When an application is sent to the background it shouldn’t consume any resources
Principle 3: Application should be resumed fast (hence the name FAS)

As you’d see that these played a vital role in the design being discussed below.

The states an application goes through is documented in http://msdn.microsoft.com/en-us/library/ff817008(VS.92).aspx

The diagram below captures the various phase that are used to rundown the application to make it dormant and later re-activated.  It gives the flow of an application as it goes through the Active –> Dormant –> Active state (e.g. the application was running and the user launches another application and then uses the back button to go back to the first application). 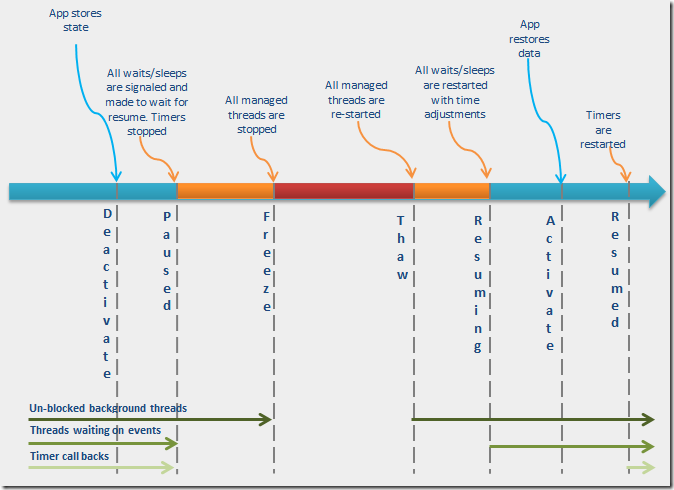 The Deactivated event is sent to the application to notify it that the user is navigating away from the application. After this there is 3 possible outcomes. It will either remain dormant, gets tombstoned or finally gets killed as well. Since there is no way to know which would happen, the application should store its transient state into the PhoneApplicationPage.State and it’s persistent state into some persistent store like the IsolatedStorage or even in the cloud. However, do note that the application has 10 seconds to handle the Deactivated event. In the 3 possible situations this is how the stored data will be used back

The above supports the #1 principle of not breaking pre-existing WP7 apps. A WP7 app would’ve been designed without considering the dormant stage. Hence it would’ve just skipped the #1 option. So the only issue will be that a WP7 app will result in re-creating the application state each time and not get the benefit of the Dormant stage (it will get the performance of Tombstoning but not break in Mango).

Post this event the main thread never transitions to user code (e.g. no events are triggered). The requirement on the application for deactivate is that

If app continues to run code, e.g. in another thread and modifies any application state then that state cannot be persisted (as there will be no subsequent Deactivated type event)

This event is an internal event that is not visible to the application. If the application adhered to the above guideline it shouldn’t care about it anyway.

The CLR does some interesting stuff on this event. Adhering to the “no resource consumption” principle is very important. Consider that the application had used ManualResetEvent.WaitOne(timeout). Now this timeout can expire in the time when the application was dormant. If that happened it would result in some code running when the application is dormant. This is not acceptable because the phone maybe behind locked screen and this context switch can get the phone out of a low-power state. To handle this the runtime detaches Waits, Thread.Sleep at Paused. Also it cancels all Timers so that no Timer callbacks happen post this Pause event.

Since Pause event is not visible to the application, it should consider that some time post Deactivated this detach will happen. This is completely transparent to user code. As far as the user code is considered, it just that these handles do not timeout or sleeps do not return during the time the application is dormant. The same WaitHandle objects or Thread.Sleeps start working as is after the application is activated (more about timeout adjustment below).

This is also the place where other parts of the tear-down happens. E.g. things like asynchronous network calls cancelled, media is stopped.

Note that the background user threads can continue to execute. Obviously that is a problem because the user code is supposed to voluntarily stop them at Deactivated.

Besides user code there are a lot of other managed code running in the system. These include but not limited to Silverlight managed code, XNA managed code. Sometime after Paused all managed code is required to stop. This is called the CLRFreeze. At this point the CLR freezes or blocks all managed execution including user background threads. To do that it uses the same mechanism as used for foreground GC. In a later post I’d cover the different mechanics NETCF and desktop CLR uses to stop managed execution.

Around freeze the application enters the Dormant stage where it’s in 0 CPU utilization mode.

Managed threads stopped at Freeze are re-started at this point.

At Resuming the WaitHandle, Thread.Sleep detached in Paused is re-attached. Also timeout adjustments are made during this time. Consider that the user had two handles on which the user code started Waits with 5 seconds and 10 seconds timeouts. After 3 seconds of starting the Waits the application is made dormant. When the application is re-activated, the Waits are restarted with the amount of timeout remaining at the point of the application getting deactivated. So essentially in the case below the first Wait is restarted with 2 seconds and the later with 7. This ensures that relative gap between Sleeps, Waits are maintained.

Note timers are still not restarted.

This is the final stage or FAS. This is where the CLR restarts the Timers. The idea behind the late start of timers is that they are essentially asynchronous callbacks. So the callbacks are not sent until the application is activated (built its state) and ready to consume those callbacks.