I'm trying to learn WPF and IMO it is not a simple task. Previously whenever I upgraded my UI technology knowledge it had been easy as it build on a lot of pre-existing concepts. However, WPF is more of a disruptive change.

I decided to write some simple fun application in the effort to learn WPF. Since I cannot write a BabySmash application as Scott Hanselman has already done a awesome job out of it, I decided to code up a simulation of A* path finding algorithm and push it out as a screen saver. The final product looks as follows. 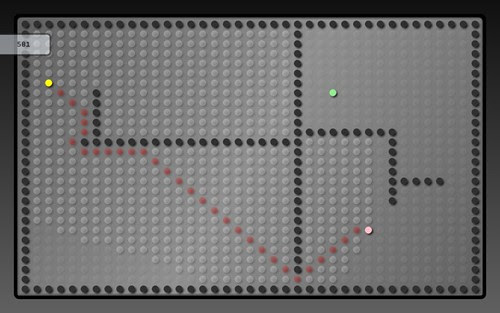 What it does is that it shows a source, a destination with blockages (wall, mountain?) in between and then uses A* algorithm to find a path in between them. This is the same kind of algorithm that is used in say games like Age of the Empires as workers move around collecting wood and other resources. The algorithm is documented here.

Obviously this was more of a quick dirty hobby project and there remains a ton to work on. E.g.

Download the final binaries from here. Unzip to a folder, right click on the *.scr and choose Install

Cool screensaver project. Hope learning WPF gets easier as you go along.

I noticed that you were in India, so I thought this blog post that I wrote might be of interest to you.
http://jaxtr.blogspot.com/2008/09/jaxtr-gets-local-numbers-for-mumbai.html
Take care.