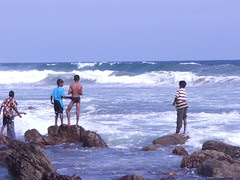 Last two weeks my cell phone got assaulted thrice. First it was someone sending me a virus over bluetooth (a sis file actually). This happened when I was taking a photograph of my daughter with the cell phone camera in a restaurant (Aromas of China, City Center mall in Hyderabad).

The next one was bluetooth based advertisement messages in the Forum Mall in Bangalore. They were actually sending offers of the hour over bluetooth and I got 2 such messages.

The third incident was in the airport when someone was again trying to send me and make me open an trojan app.

I was really surprised with the rapid growth of cell phone based attacks. Worst is few people know of this. My wife had no idea that you can actually send applications over bluetooth and that can infect the phone.

Email ThisBlogThis!Share to TwitterShare to FacebookShare to Pinterest
Labels: Coding / .NET, Everything Else, Software

So is there any followup to this? Is MS putting out a security warning, patch that can help spread the word?

I own a Nokia phone. So how does MS come into the picture?