The differences between int[,] and int[][] 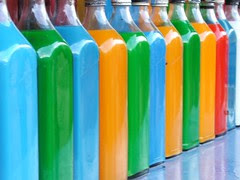 A friend asked me the differences between the two. Here goes the answer

This is defined as array of arrays or as jagged arrays. They are created as follows

Here the number columns is not the same for each row. A good example of this kind of usage is when we have a array of polygons where each row contains the coordinates of the vertices of the polygon. Since each polygon has different number of vertices (square, triangle, ...) this data-structure is useful in defining it.

Since it's jagged it has to be referenced carefully.

The jagged array can be padded on the right to convert it to a rectangular array, but this will result in a lot of space wastage. In case of the jagged array the usage of space is sizeof(int) * 9 but if we pad it we will use sizeof(int) * max (column). This additional space can be significant.

int and 2D arrays were used only as example. This applied equally well to other data-types and higher dimensions.